After school on a recent Friday afternoon, Brewster High School students and their teacher, Alexander Gutiérrez, huddled around their computers in their home kitchens with milk, eggs and sugar at the ready. The group, made up of students from two of Gutiérrez’s classes, came together over Zoom to learn how to make flan (a caramel custard).

“Mr. Gutiérrez conducted one of the most fun, creative, and engaging online Zoom calls for his students,” said Karen Dakin, an English as a New Language teacher at Henry H. Wells Middle School whose daughter participated. “His love of teaching was evident and infectious, creating a sense of excitement in his students while instructing them on how to make flan.”

The idea for the optional cooking class came up after discussing traditional Christmas meals in class. Gutiérrez made his first flan over the winter break and students showed interest in learning how to bake one themselves.

“I thought a fun activity would be good for students during these strange COVID times,” Gutiérrez said. “Plus, students got to use Spanish outside of the classroom in a real-life context, which is the ultimate goal of learning a language.”

Before the class, Gutiérrez posted the recipe and all of the ingredients and materials needed on a Google Classroom created specifically for students interested in the cooking class. Everyone joined the meeting with their ingredients and materials ready and worked together until it was time to put their creations into the oven. About 27 students from Spanish Bilingual I and Advanced Spanish III took part.

“I was interested in participating because I’ve never had a teacher do this type of thing before and I thought it was really cool that he was incorporating Spanish with cooking,” said Jancy Espinoza, a sophomore in Advanced Spanish III.

For many students, it was their first time making flan — even if it is a treat their families enjoy regularly. Ivelisse Arocho, a freshman in Gutiérrez's Bilingual I class, had never made it, although she had seen her mom make it.

“I thought it would be interesting to see how people from different Spanish-speaking countries make flan differently,” Ivelisse said. “Being Puerto Rican, I was curious to see how Sr. Gutiérrez, who I know is of Spanish descent, made the same baked good that is such a prominent part of my culture. I think it's always good to expose yourself to other cultures and expand your knowledge on things you are already familiar with.”

Juliet Arroyo, a sophomore in Advanced Spanish lll, was also interested in the cultural aspect of the experience.

“I enjoy learning about new foods and cultures from different parts of the world so I thought making flan would be really fun. Plus, I love baking,” Juliet said.

“It was an enriching hands-on experience that further developed everything we have been learning in class,” Madison said. “I appreciate that Sr. Gutiérrez is not only teaching us the language but aspects of the culture as well.”

Aside from culture, students also learned a little bit about perseverance. A conversion error led to some less-than-perfect flans, but, in a message to students, Gutiérrez related the experience to life in general.

“In the kitchen, as in life,” he said, “not everything turns out right the first time, but the most important thing is to learn from experience and try again until we succeed.”

This was a lesson students seemed to take to heart.

“I learned to have patience and perseverance,” Juliet said. “At first, my flan wasn't cooking and it was still liquidy after I put it in the oven for an hour. I thought I did something wrong, but all I had to do was wait longer for it to cook and it came out perfect!”

Other students had never tried to make flan because they were afraid it would be too difficult.

“I’ve never done it before because I thought it was harder to make,” said Yulissa Posadas Aguirre, a freshman in Bilingual I. “I learned that you should always try what you want to do.”

“Sr. Gutiérrez connected learning a language with culture, inclusivity, and positivity, all in one virtual activity,” she said. “As a parent and a teacher in the district, I am so impressed and grateful that my daughter was able to take part in such a hands-on, enjoyable experience.” 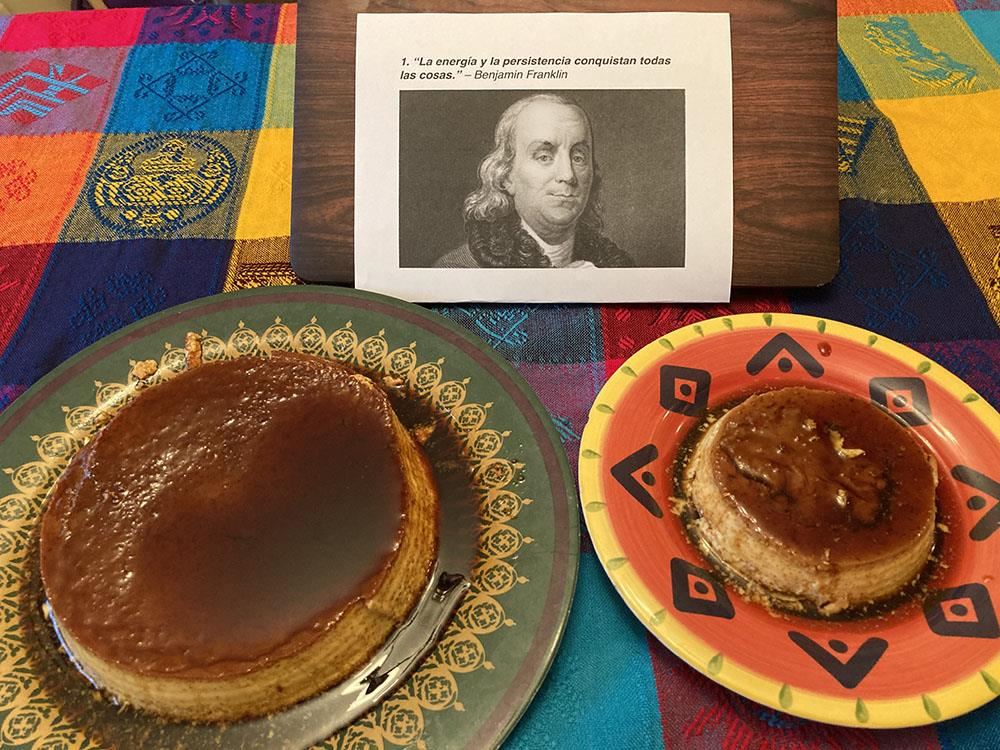